Junior Agogo is the latest Ghanaian football personality to die untimely after battling with stroke for years. 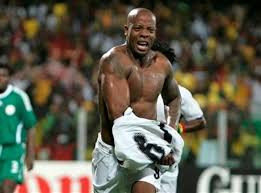 Following the death of Junior Manuel Agogo whose death has broken Ghanaians hearts, Pulse Sports has compiled a list of sports personalities whose passing were very saddening and premature.

The man arguably rated as the finest dribbler in the history of Ghanaian football’s death was very sadden.

He got paralysed following a road accident while on a bus with Real Republicans for a league game in 1963.

Yara, affectionately called the ‘King of Wingers’ sat in wheelchair until he died in 1967 in his 30s.

His death struck the football fraternity so much that it broke the hearts of a lot of Ghanaians.

He is touted as the greatest goalkeeper Ghana has ever witnessed. His heroic goalkeeping made him safest pair of hands on the African continent.

He played a key role when Kotoko won the competition beating Englebert in January, 1971 in the final.

His death was devastating and unexpected: Bob Mensah as he was affectionately called was stabbed with a knife when trying to separate a fight between two friends at a drinking spot in Tema.

Ghanaian and Kotoko fraternity were heart broken for losing the first-choice goalkeeper for the senior national team of Ghana and the Porcupine Warriors who were Africa Champions at the time.

Several tributes poured in for him and a song was even composed in his honour.

He was one of the players that sold the Ghanaian topflight league in the early 1990s. The battle for the bragging rights between him and former Asante Kotoko’s striker Joe Debrah gave fans much to cheer about.

However, Shamo Quaye passed shortly after he joined Swedish club Umea from Accra Hearts of Oak in 1997.

There was a mystery surrounding his death, because he didn’t fall sick prior to his demise.

The entire country turned upside down after news of his death. The Hearts of Oak fraternity wept uncontrollably so as several Ghanaian football fans who loved the national team and the local league, where Quaye made his mark

Sly Tetteh as he is affectionately called died after he collapsed during training by Liberty Oldies.

He was pronounced dead on arrival at the hospital.

He is credited with the discovery of Michael Essien and many of the present Black Stars squad including Sulley Muntari and Asamoah Gyan.

As a footballer, Sly Tetteh won the West African Club Championship with Sekondi Hasaacas in 1982.

He was born in Accra and grew up in Sekondi. He attended the Liberty University of Lynchburg, Virginia in the United States from 1992 to 1995.

Until his death, Sly Tetteh was running academies in Ghana, Togo and Kenya.

Former Hearts of Oak midfielder Uriah Asante passed on in 2016 due to a cardiac arrest.

The death occurred at the Korle-Bu Teaching Hospital after he was rushed there due to ill health.

He was 24 years as of the time of his passing.

Asante played for Hearts of Oak on loan from Pure Joy FC and was a member of the gold winning team at the All Africa Games in Maputo five years ago.

He also featured for Tunisian side Etoile du Sahel and EGS Gafsa.

READ ALSO: 11 Nigerian Footballers Who Have Never Played For Nigeria

Akuapem Poloo can lie for Ghana, she didn’t get married

These Five Ghanaian Actors And Actresses Are Not Acting Movie Again.

VIDEO: The Embarrassing Moment Funny Face’s Ex-Wife Snubbed Him While Trying To Talk To Her At Adonko Next Level Launch