Many Ghanaians where anticipating that this morning we would have woke-up to find strange and mysterious news on the internet concerning the powerful fetish priest who was arrested by the BNI yesterday leading to the closure of her two tv stations.

Surprisingly the story is still the same as Great Nana Agradaa finds herself exactly where she slept last night, in the BNI cells, instead of her expensive gold plated bed at home.

History and stories have it that, spiritual people are capable of doing mysterious things in the spiritual realm, unlike we see the fetish priest on television blowing whistle calling on her dwarves conjuring spiritual money from the sky to entice her victims, I taught her 7 dwarves who have been always loyal to her in turning credulous people’s money into “Sika Gari” would come for her at the middle of the night and make her disappear into think air, from the BNI cells as a prove that indeed she is much powerful as she claims and gently walk to the station this morning to report herself. 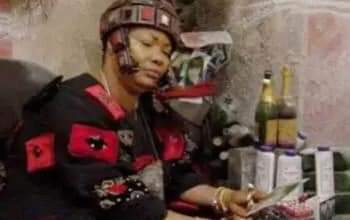 Can we conclude that the dwarves intentionally failed her as a result of trading in their names and have refused to pay them their percentage of the commission agreed and as such wouldn’t interfere in what has befallen her. Better still she is powerless but having external hands from people in position backing her in this fake business of hers.

I know by now Big Akwess, the chief spokesperson of Nana Agradaa has started putting documents in place under the instructions of their Lawyer to sue the dwarves for breach of contract and defamation citing the case of Alidu and his goat as a binding precedent, hahahaha.

Sincerely I’m disappointed in the National Communications Authority (NCA) for stating that Agradaa was operating her tv stations illegally, I asked so they were supervising illegal work for all this while, if not the death of the 10-year-old boy and Ghanaians adding their voices, no action would have been taken right?

Follow Ghanaians, I think all individual who have been a victim of this woman, should kindly run to a nearby police station to a file an official complaints or else we will sit her, sooner or later she will come as a free woman to continue her business with much, much professionalism.

I don’t hate her but disagree with her activities and don’t forget she isn’t alone all the fake pastors and mallams shouldn’t walk scot-free. Let’s say no to human sacrifice and money rituals to safe the youth, seems hardwork and being a little bit smart brings riches.