Afia Schwarzenegger born on 14 February 1982 is a Ghanaian TV host, Actress, and Comedienne who leads a dramatic life.

She currently owns a popular channel on Youtube -Schwar TV and is a Philanthropist with a keen interest to help the needy.

On the 14th of February,1982, Valentina Nana Agyeiwaa popularly known as Afia Schwarzenegger, was born to Augustine and Grace Aciaa Agyei. She is a native and grew up in her hometown; the suburbs of Krofrom in Kumasi, Ghana. She later moved to Johannesburg in her late childhood years.

Her schooling years were once tagged as “illustrious” due to her stint at multiple educational institutions. She received a basic education at Ridge Experimental School and joined the Seventh Day Adventist in Tamale.

Now a popular figure in West Africa, Afia Schwarzneggar started off as a host on Okay FM radio station for the morning show- Yewo Krom, UTV Ghana’s Kokooko Show and has also worked with Happy FM, Kassapa FM, and TV Africa in Ghana.

She attained stardom after featuring in a TV series titled Afia Schwarzenegger; produced by Deloris Frimpong Manso. She also worked as a flight attendant in South Africa for a very brief spell. 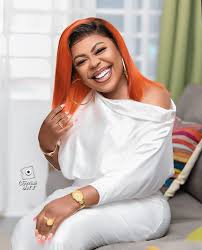 Afia is currently the CEO of a Youtube media outfit- Schwar TV and the host of The Breakfast Show, She is also the ambassador of Orphans in Ghana after her appointment by the Association of Children Homes and Orphanages in Ghana.

She founded the Leave2Live Foundation- a medium she has used to support victims of domestic violence. She also owns a non-profit organization called Owontaa Street Ministry; aimed at feeding the less privileged in Ghana.

Afia’s husband from her first marriage is believed to have been a pastor (Mr. Godson Yaw Boakye) based in the UK. She was forced to divorce him upon learning that he was already a married man before meeting her.

Her second marriage was to a white man from South Africa.

Her last marriage was to a man named Lawrence Abrokwah. The marriage hit the rocks after it emerged that Mr. Abrokwah allegedly found her cheating.

Afia has five children, three of them adopted and two biological. Her biological children are twins ( The Heerdegen Geiling)

No one can deny that Afia is an entertainer of note and she has been crowned the Entertainer of the year at the Ghana Entertainment Awards USA. 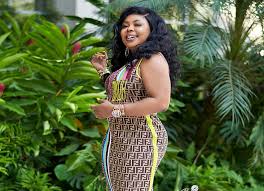 She was nominated for the Ghana Actors and entertainers awards 2019.

Afia drives a blue BMW X6, Jaguar, G-wagon, and a Benz. She bought the car as a birthday gift for her 37th birthday. Afia put Tweets to shame who have previously accused her of getting cars from politicians. 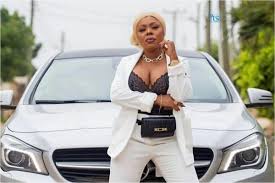 Those who know the politicians that buy me cars…I beg who bought this one? Plz hurry up and let me know since I can’t buy myself anything…,” she Tweeted.

The gated mansion is beautifully tiled with stunning colors and beautiful flowers. In the latest video, the firebrand entertainer flaunts the inside furnishing of her luxurious mansion with masterfully crafted designer doors. 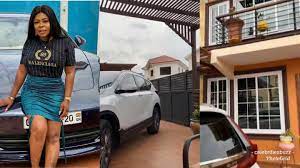 The tiles are matched by the colorful staircase and well-designed wall frames, showcasing the images of her kids, father, and herself.

The Ghanaian actress Afia Schwarzenegger net worth currently stands at $100,00-$500,000